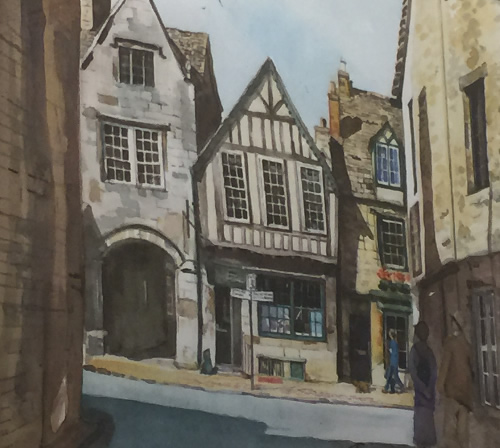 From the Middle Ages to its closure c.1800 this was one of Burford's most important inns, located closeto the Tolsey and opposite Witney Street. When first recorded in 1485 it was owned by William Brampton, and since the family were leading inhabitants from the late 14th century the inn may go back that far. Later keepers included Agnes Charleye (died 1572), sister of the prominent Burford merchant Simon Wisdom; John Collier (died 1634), who in 1608 added Nos. 110-112; and Robert Aston (keeper 1674-97).

The large stone gatehouse was designed to be noticed by travellers arriving from the east. Under the arched carriageway, on the left, is a pair of blocked arches of c.1300, and similar arches survive inside the stone and timber range (now an antique shop) to the right of the gatehouse. Possibly they lit small lock-up shops. The timber-framed and jettied 15th-century wing sits on a later stone ground floor, its moulded jetty beam (supporting the protruding upper floor) just visible above the present shop window. Other early features include the tops of timber mullions, and vestiges of four sets of windows with traceried heads. A window at ground level lit the cellar, which may have been a tavern; fragments of a stone newel stairway leading down to it can be seen inside. In an upper room is a blocked opening with 15th-century quatrefoil spandrels. All these front rooms were used for eating and drinking, with accommodation round the courtyard to the rear.

In the early 17th century the gateway was altered by the addition of a stone gable with decorative finials, lit by a three-light casement window with drip-mould. Below is part of the original window to the room above the gateway, which had fluted jambs and probably one or two stone mullions. The asymmetric position of the window and archway suggests that an earlier layout dictated the position of the new work, which was probably contemporary with the incorporation of Nos. 110-112 next door (see below). The carriageway's right-hand wall seems to be part of the 17th-century alterations, and visible in its roof are the timber supports for a hearth-stone in the room above. Iron pintles (or pivots) for gate hinges survive in the left-hand jamb.

Looking back from the rear yard, the original line of the gatehouse roof can be seen running parallel to the street. Behind the gatehouse, two steeply sloping roofs have a later linking section in front. This was probably built as a covered way around 1608, when Nos. 110-112 (right of the gateway in the rear-view picture) were added. The long range on the right was probably stabling, with sleeping accommodation above, and a kitchen mentioned in 1632 would have been in this part. The jettied row on the left was possibly a 15th-century dormitory range, though a stone-mullioned window in the centre suggests an early 17th-century rebuilding. On the street front, fashionable tall sash windows with thick glazing bars replaced the original windows of the jettied wing in the 18th century.

After the inn's closure the front part became a shop, occupied in the 1850s by a milliner and dressmaker and in the 1860s-80s by a clockmaker. The shopfront is mid 19th-century, and some of the timber-framing and the bargeboards were renewed in the 20th.

The yard was turned into cramped cottage accommodation: from the 1840s to 1890s there were up to 12 households and 53 people here, including masons, labourers, seamstresses, and quarrymen. In the 1920s it was old people's accommodation, and in the 1960s the cottages were bought by public subscription and renovated as low-rent housing, many of them being combined.